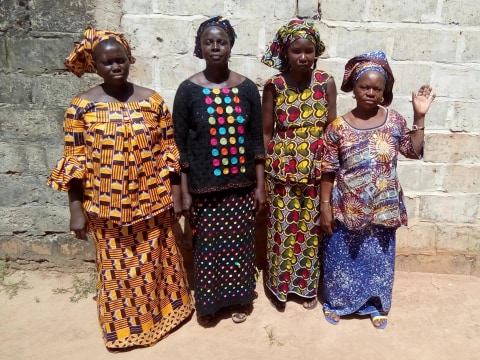 The bank villageois to which this group of four women belongs has been inaugurated in July 2002. The group members mainly work as vendors selling miscellaneous products.

Ms. Saly Ibou, the one on the right in the photo raising her hand, is the group representative. She is married, 58 years old, and has seven children, including two daughters. She has been working as a vendor for a number of years.

With her new loan Saly Ibou plans to buy five jugs of palm oil, five jugs of lemon juice and five pail of locust bean seeds to resell at the local market. Saly Ibou’s revenues will allow her to help her husband with everyday expenses as well as to grow her savings.