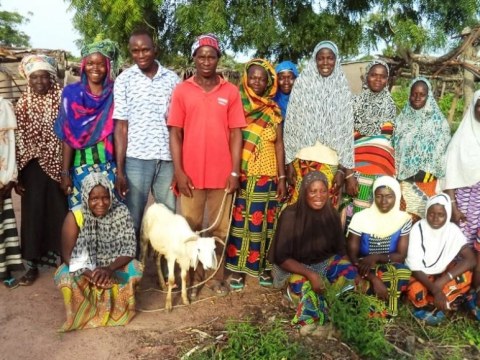 Cessiri Group's loan finished fundraising, but these other borrowers need your support

A loan helped to buy sheep to resell later.

Yacouba is the man holding the ram's rope on the group picture. Yacouba breeds rams. He is Malian and thirty three years old. He is married and the father of two children, aged 4 and 6. His wife is a housewife. He buys and sells his animals at weekly fairs in his area. After the sales, he can have profits of between 25,000 and 40,000 CFA every eight months.
He has been doing this job for five years. His income allows him to pay his children's medical, clothing and schooling fees and to ensure his family's food security.
But often he has to face major difficulties in his activity at times when animal prices fall on the markets.
Yacouba is relying on a strengthened financial support from RMCR so that he can build a large paddock and buy many animals, in order to expand his business, eradicate his poverty and improve his family's living conditions.