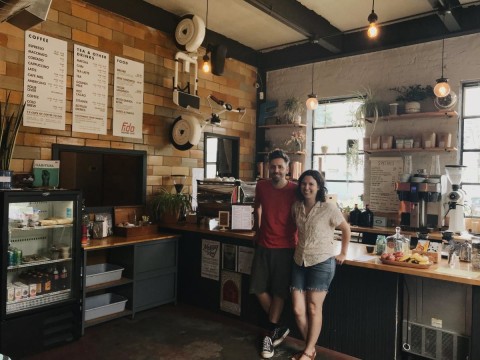 A loan helped expand our cafe to triple our seating, add a kids space, increase much needed staff work areas and make other improvements to the space.

Krystal and Jeb were both raised in families that encouraged curiosity and creativity. Both of Krystal's parents also operate their own businesses. Jeb has spent much of his life riding, fixing or building scooters. When he realized he could build an electric scooter unlike any other, he decided to go for it. Along the way, they purchased a building to manufacture the Fido scooters and ended up with a bunch of extra space. They wanted to surround themselves with other small businesses and manufacturers that shared their passion for quality craftsmanship, curiosity, creativity and collaboration. So they began rehabbing the other two buildings on the property to provide space to support the growing and thriving community they named Jericho Town. They also desired a public space that could serve as a showroom for Fido and provide a welcoming community gathering space in the neighborhood. From that idea, Fido Motors Cafe was born. The goal is to provide a welcoming space that entices you in with good coffee, tea and food and leaves you feeling inspired and connected to another corner of Kalamazoo.