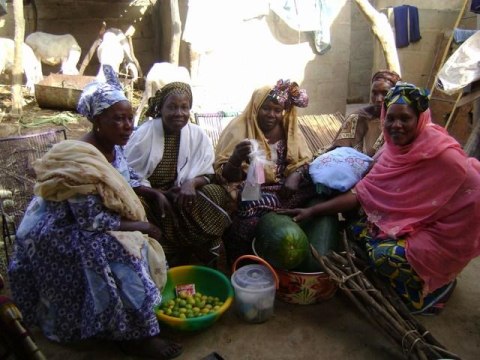 A loan helped The purchase of various items.

The Balel group is made up of five women – one widow and four married – who mainly live in polygamous families. They are, on average, 44 years old, have an average of five children each, and live in the Hamdallaye quarter of Ségou town (the fourth largest administrative region in the Republic of Mali). They met through neighbours and are all members of the same mutual-aid association. They are generally involved in the sale of miscellaneous items, dressmaking, and in sheep fattening. They are on their fifth solidarity loan, and have successfully repaid their four previous ones. This new loan would be used to buy 100 watermelons, some lemons and oranges, 10 pieces of colourful fabric [pagne wax is a West African term for a highly decorative colourful material], 6 ‘Faso danfani’ cotton suits, 4 rolls of poplin in various colours, 6 packs of hand embroidery thread, one cartload of firewood, 7 bags of henna and 5 sheep. They source their watermelons from Boki Wèrè, their lemons and oranges from orchards, their colourful fabric and cotton suits from Bobo-Dioulasso (Burkina Faso), and their poplin, thread and henna from the Château de Ségou market. The women buy their firewood from Tona, and their sheep from Konodimini. The majority of their merchandise is sold both individually and in bulk at the Château market and through home sales. Cash and credit payments are received from a customer base made up of both men and women. They aim to make an average monthly profit of 41,000 FCFA which would be used to repay loans and to buy food, soap, school equipment and medicine. Their ambition is to have a house and to guarantee the education and training of their children.