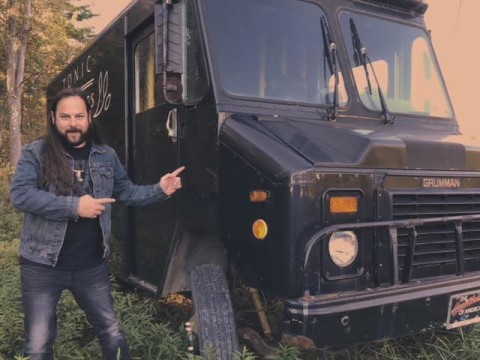 What I’ve always wanted to be a was a storyteller. Movies are a tremendous part of my life and I even have a concentrated B.S. in Film. Early on, I wrote and produced a few short films and then later turned my attention to screenwriting, which snagged me some short-lived representation in Los Angeles. Other people’s stories have always fascinated me but what I’ve recently realized is how my own story can be such a catalyst to others. ly realized is how my own story can be such a catalyst to others. Ignorant as it may sound this is something I never really considered until I started Sam Hill Coffee Company. Fed up with constantly struggling to take care of my growing family, I started the business three years ago on the Fourth of July with nothing more than a bag of coffee beans and an open fire. I experimented, I wrote everything down, I learned the art of the roast. My techniques and equipment eventually improved and became a bit more conventional, but those first fires made me realize that the truest road to the American dream is by blazing a fiery path through the day-to-day mediocrity of life. Something clicked in me then, my anger and frustrations I’ve faced in taking care of my family always went away when I simply pursued “my own way.” I started selling my coffee online, at flea markets and local festivals, at mom&pop shops, to strangers passing by on the street and any other way I can. Word started getting out, other people started to hear my story and I realized I wasn’t alone in my struggles. If I’ve learned anything in these last three years it’s that coffee is the great unifier, the one love most of us all have in common. And within that love burns inside us all a stubborn spark of rebellion.