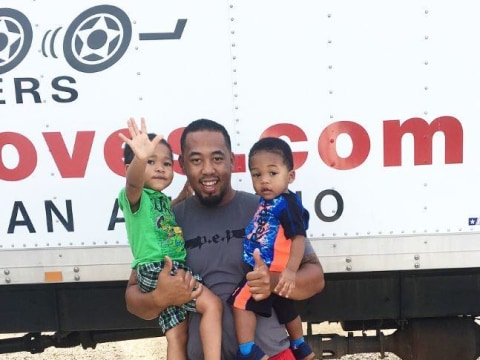 A loan helped a business that caters to residential and commercial moving needs in greater Houston and Austin area and helps me show my sons how to run a business, repay debt, build credit, and nurture relationships.

My name is Derek Campbell. My dad was a contractor with the US Army, and I was born in Germany and lived in Korea for eight years before we returned to Fort Hood in Texas. I had a dysfunctional relationship with my stepmom and finally moved to Houston to live with my brother. I was active in high school sports, and the challenge and discipline of athletics was the primary reason I graduated. My brother was going to college and working two jobs to make our life possible, but I did not see his sacrifice at the time. What I saw was the freedom and lack of supervision his schedule afforded me, and I started hanging with the wrong crowd – a group that ultimately led to a life of crime and prison at age 18. I had a part-time job in high school but had quit it for the easy money that crime offered. In prison I was recruited for the Prison Entrepreneurship Program (PEP). This program challenged me and made me renew my discipline to achieve my goals, both short-term in prison and what I wanted to accomplish after release. I was released after two and half years and started working for a telemarketing company. I liked the interaction with customers, and it helped build my sales skills. In 2013 I decided to start my own moving company. I have slowly built the company but need your help to take the next step.