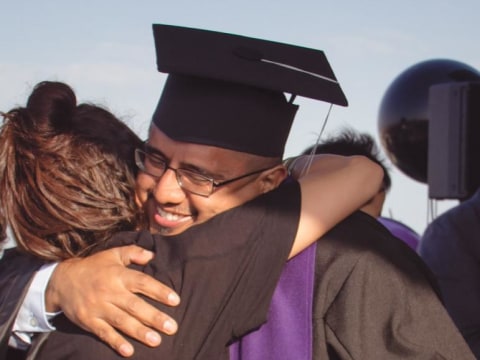 A loan helped to pay for his programming education to secure a career path in Mexico as a returned migrant from the US.

Luis clearly remembers the day his mother left him to go to the United States, a place where he would later follow her. He ended up living there for 24 years until the harsh reality for undocumented migrants caught up with him and he was eventually deported. Luis came back to his country alone, having left all his family behind in the US, Hola Code has become his family, in the picture he is with Marcela Torres, Hola Code's CEO.

Luis found himself back in a country of which he had barely any memories and soon got blocked by the lack of available opportunities. He joined the Hola Code's program 6 months ago, skeptic about it because it seemed too good to be true. This coding bootcamp works with refugees, deported and returned migrants from the US. Hola Code teaches computer programming and helps students find a high demand job, which allows access to social mobility. This means a great opportunity for careers rather than the options that are lowly paid, but the only ones achievable for those in Luis’s situation.

Luis feels passionate about the chance he has been given and is now looking for a loan to pay for his Hola tuition. The loan will be used to invest in a new student until he secures decent employment in the tech sector. Hola’s education greatly improved Luis’s options, increasing his monthly income around 3 times, so that he can finally start in his new future.