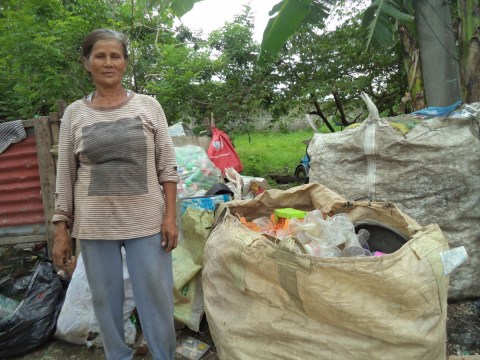 A loan helped to buy more recyclable scraps, including old and damaged appliances.

Marcela, 62 years old, lives with her husband and a grandchild in a semi-rural community. Her three children all have families now, and live in the same condition as her and her husband. Because of this, Marcela and her husband could not retire yet, and on the other hand, also took it upon themselves to take care of and support the education of one of their grandchildren.

Marcela initially was selling vegetables, but their main source of income is buying scraps from houses that can be recycled. This business had been small when they started in 2008, but grew a bit over time. She and her husband saved enough money to buy a secondhand motorcycle, on which they plan to have a carrier assembled to transport the recyclables from houses to their recycling yard. This would mean less effort compared to going from house to house with their wooden pushcarts in tow.

She is requesting a loan of PHP 28,000 to have a carrier assembled and to buy more recyclable scraps, including old and damaged appliances such as refrigerators and washing machines.

She is hopeful that this would ease out their activity and, at the same time, allow for her and her husband to cover more areas and customers.