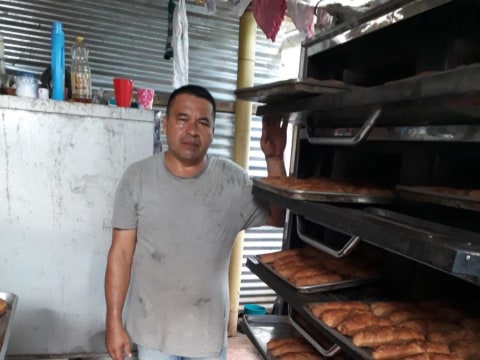 A loan helped to invest in supplies, vegetables, whole wheat bread, and dressing necessary for his work.

Sabat is a 55-year-old micro-entrepreneur who lives with his family in El Carmen de Bolívar. He learned the bread-making trade as an assistant, and when he had acquired sufficient experience, he became independent.

After 3 years in the business, he put down roots in Venezuela where he continued working and perfecting his trade. He returned to Colombia in June 2017, due to the crisis in the neighboring country. In November, he started his bakery, using his resources and a loan from a relative to cover the transport of his machinery and work team that he had in Venezuela, which he managed to bring to Colombia. In the same location as his bakery, he has a vegetarian restaurant where his wife and two employees help him.

Currently, he is applying for his first CrediKiva to invest in supplies, vegetables, whole wheat flour, and dressings necessary for his work. Show him your support with this loan.