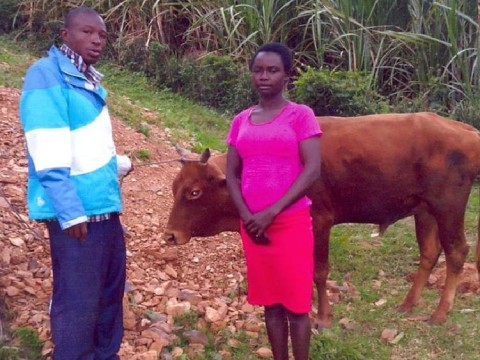 Geoffrey's loan finished fundraising, but these other borrowers need your support

A loan helped to buy sugarcane cuttings to plant sugarcane on his farm to meet the local demand for sugar.

Geoffrey (pictured alongside his better half) is one of the most hardworking men on planet earth. He is a man who has always been motivated to work by his unending desire to get out of poverty and live his life as an independent man.

Because of the massive knowledge he has about farming, he commands a lot of respect among other farmers, and he is viewed as a mentor in his village. This level of success has been fuelled by, among other things, his perseverance, commitment and enthusiasm.

Geoffrey's primary income sources are eggs, maize, and milk. He also keeps a dairy cow. Generating an income through selling his harvest is the part of farming he enjoys most. The ups and downs of growing commodity crops have become more frequent and severe.

Geoffrey is taking out this loan to buy sugarcane cuttings to plant sugarcane on his farm. The local demand for sugar in Kenya is high and has caused an increase in the number of sugar companies. However, most farmers in Kenyenya have not had a reliable source of credit for farming.

Unlike most microfinance institutions in Kenya that have imposed very complicated procedures in fund acquisition, thereby discouraging smallholder farmers, Juhudi Kilimo is working closely with Kiva to make loan acquisition for a smallholder farmer easy and convenient. Geoffrey thanks Kiva lenders for their good will.