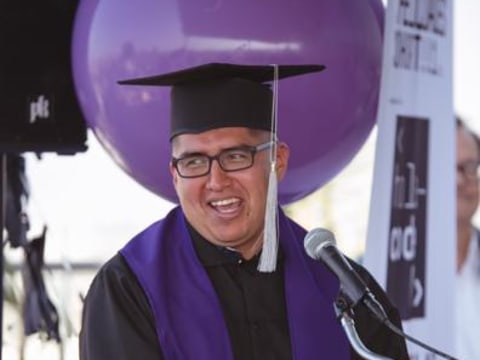 A loan helped Eduardo, a returned migrant from the US, to pay for his programming education to secure a career path in Mexico.

Eduardo is 26 years old and recently returned from Dallas, Texas. Eduardo moved to the US at the age of one, and was surprised to find out he did not have any documentation when he reached adulthood. Eduardo was deported at the age of 25, not knowing much about the country he was being sent back to and forced to leave his 4-year-old daughter behind.

Returned to Mexico, Eduardo found that working 16 hours a day for very low wages was a very tough reality to face. When Eduardo found Hola around six months ago, he considered all of this to have happened for a reason.

Hola is a coding bootcamp and social enterprise that works with refugees, deported and returned migrants from the US. The main goal of Hola is to teach computer coding skills and to aid the students in securing a job in the Mexican tech sector. This means a growing career path in tech rather than the poorly paid options otherwise available for people like Eduardo.

Now, Eduardo is looking for a loan to pay for his Hola tuition. This will be used to invest in a new student, because Eduardo is keen on helping future generations coming back from the U.S. Hola’s education greatly improved Eduardo’s future possibilities, increasing his monthly income three times and securing brilliant perks.