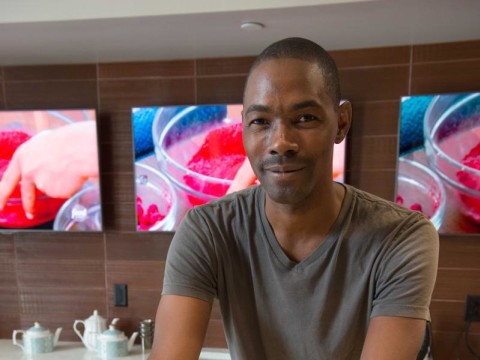 A loan helped me to procure additional tea inventory, purchase equipment, improve product packaging, and expand my online presence. This loan will also help me raise working capital that will enable my business can meet existing customer demand.

I was born in the inner city of Canton, Ohio to my single mother in difficult circumstances. Early on I learned to rely on my imagination and hard work. As a kid, I would gather hand me down toys and resell them to neighboring parents after giving a sales demonstration. As a teenager, I started a barber shop, and by 19 was doing promotions for a hair clipper company. I worked my way through design school Art Institute of Pittsburgh, and upon graduation was named the head designer of a startup children’s television video series which went on to win three Telly Awards. Purely by happenstance, I was asked to be in a fashion show with noted actress and model Rebecca Romijn. The designer whose clothes were being shown was Tommy Hilfiger, who invited me to work for the line in New York as a model and spokesperson. I used this opportunity as a priceless learning experience in the business. Talented and successful friends mentored me, encouraging me to seek my own success. After relocating to Los Angeles, I later founded Charles & Company. As a tea enthusiast and premium tea purveyor, I’m inspired by the inherent healthfulness of tea. No other beverage has the ability to positively affect the body, soothe the mind, and create opportunities for relaxed, enjoyable social interactions. I have dedicated myself to let others know about the health and social benefits of tea, including its unique capabilities for supporting women’s health. As an Industrial Designer turned Entrepreneur, I believe I will play a role in helping people make healthier choices, and through this journey, I believe I will change the circumstances of my family while helping as many charities helping women and children along the way.