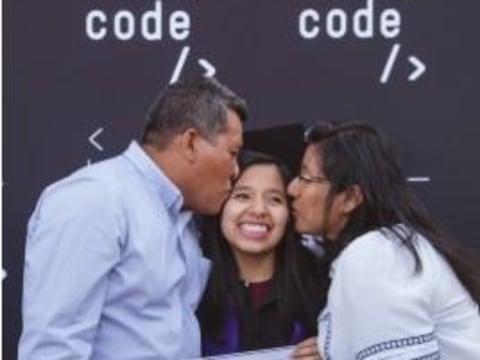 Miriam's loan finished fundraising, but these other borrowers need your support

A loan helped pay for software programming education that will allow this returned migrant from the U.S. to secure a career path in Mexico.

Miri, age 21, is a returned migrant from the U.S. now living in Mexico. Raised in the U.S., she found out at age 14 that she was undocumented and therefore would not have the opportunity to attend college. The fear of deportation led her to return to Mexico, a country she had left as an eight-month-old.

Miri is a hard-working and ambitious young woman who was recognized by her tech mentors as the top programmer in her class. Five months ago, she enrolled in HolaCode, a social enterprise and programming boot camp that works with refugees and with deported and returned migrants from the U.S. to train them and help them secure a career path in Mexico. This provides an opportunity very different from the impoverishing work options otherwise available to them. The education she receives here is expected to immediately improve her living conditions, allowing her to almost triple her monthly income.

Today, Miri is seeking a loan to pay for her HolaCode tuition. Graduates of the boot camp agree to pay their tuition once they gain employment as software engineers after graduating, allowing the program to invest in another student.

Miri's education through HolaCode will allow her to build a better future for herself and her family in Mexico.