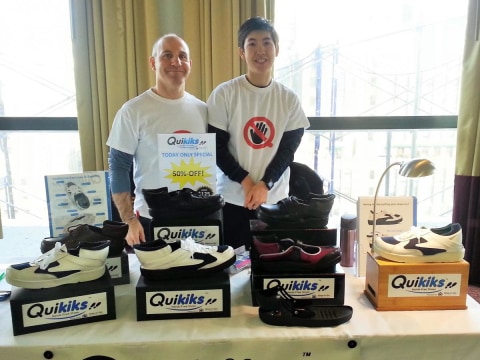 Steven's loan finished fundraising, but these other borrowers need your support

A loan helped us launch a new line of Diabetic-compliant Hands-Free Shoes that can be reimbursed by insurance.

This journey started several years ago, when my son had to wear a big torso brace to help prevent the progression of his scoliosis (curvature of the spine). However, the brace also prevented him from being able to bend over and put his own shoes on. Eventually, I had the idea to create a “hands-free” shoe so people in his situation could do this for themselves. Since that original idea, I spent years in development and lining up manufacturing. With help from people -including the Kiva community, we were able to launch Quikiks two years ago to become the World’s First Fully Supportive Hands-Free Shoes that Securely Fasten”. Since then, we have helped many people with our product, such as 83-year old Jerome with MS, who was able to put his shoes on independently for the first time with his Quikiks. Or Ken with Cerebral Palsy, who recently purchased his 4th pair because Quikiks are the only shoes he is able to put on. Other customers include people who have various conditions such as: * Stroke * Autism * Spine surgery * Parkinson’s * Vertigo * Chronic back pain * Hand & arm amputees * Rheumatoid Arthritis * Foot brace wearers * Post-op hip & knee replacement recipients We are proud to have given these vulnerable people a better quality-of-life and more independence by enabling them to easily put on and take off their own shoes. Now, we are looking to expand our reach and make Quikiks more accessible.