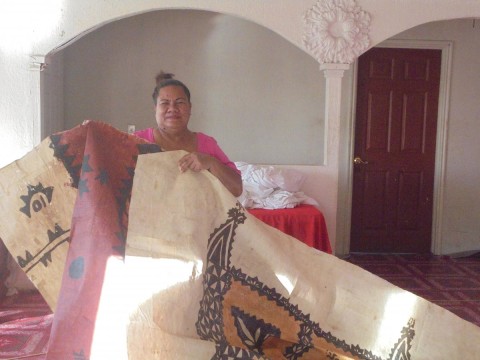 A loan helped to buy some more pandanus and mulberry for her weaving and making tapa also to help hire two women to help her in her business.

‘Ana is 57 years old and married with three children. They are living in a rented home not their own and there were eight people all together are living in the house.

‘Ana runs two businesses: one of weaving and one of making tapa. She is helped by her husband and her children.

She has been in this business for seven years of her loan cycle and sells her tapa in the market. She also earns income from the selling of her weaving.

Tonga was struck by a very strong cyclone which affected the lives most of the people in a bad way. For 'Ana, the majority of the roof of her house were damaged, 25% of her walls were damage also her pandanus was badly affected.

She says that the main challenges to her business are her resources are very limited and she’s working hard to recover her business, but she can’t meet her customers demands because she can’t afford to pay for a helper.

‘Ana requested this loan through SPBD to support her business.

In the future, she would like to buy her and her family a piece of land to own.