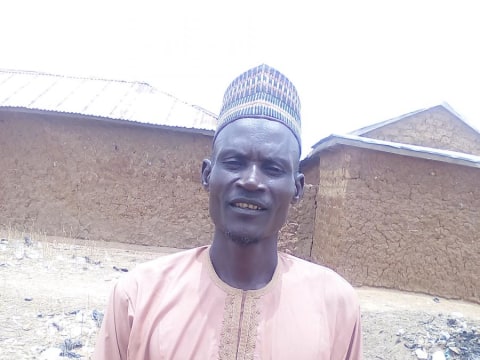 A loan helped to buy fertilizers and seed in order to get a good harvest and enhance living standards.

Hassan is from a small community in Kaduna state where he grows maize to support his family. Hassan has been a Babban Gona member for two seasons and as a result, he has been able to send one child to a better school with the profits from his farm.

Hassan’s goal for this farming season is to double last year's yield. With this loan, he will get access to improved seed, fertilizers, herbicides and other inputs which are critical to increasing his yield to up to 4.2 metric tonnes per hectare, which is more than double the national average in Nigeria. This will enable him to generate earnings of up to four times the average Nigerian farmer’s annual income.

Hassan recalls sending his children to school as his happiest memory as a Babban Gona member. Hassan looks forward to a brighter future with Babban Gona and to making many more great memories with his family.