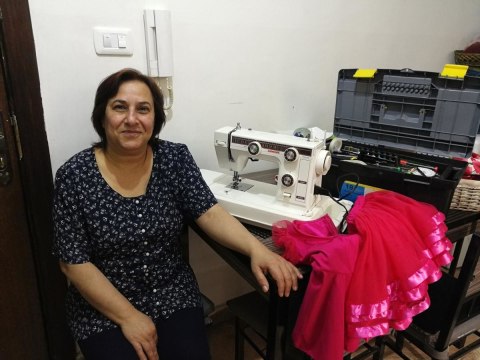 Lubna's loan finished fundraising, but these other borrowers need your support

A loan helped to expand her home-based garment-design business and buy more supplies and machines.

Lubna is an ambitious Jordanian woman and the mother of four, who believes that success can only be achieved through hard work and determination.

As a little kid, Lubna’s hobby was designing clothes. When she grew up and got married, she moved to Oman with her husband, that’s when she started designing dresses for her daughters and for herself.

Tailoring became Lubna's passion. This motivated her to take courses and improve her skills. She achieved a good success in her business until the death of her husband occurred, that caused her to stop working.

Years passed while Lubna found herself a widow with four kids on her own. The small company she inherited from her husband failed and she sold her share and decided to stay in Jordan.

While the family's financial situation became difficult, Lubna restarted her tailoring business and followed her passion in designing to regain her strength. She asked for a loan of 1,000 JOD's from Kiva field partner, Microfund for Women, to restart her home based business and buy more threads and supplies.

Lubna dreams of becoming a designer for kids’ clothes and helping orphans by donating her designs to them. She also dreams of branding her own work to increase the sales of the unique pieces she produces.