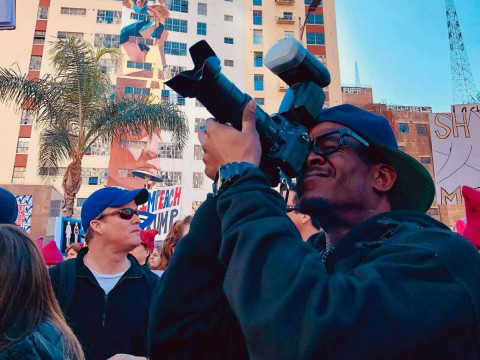 A loan helped me expand my business by allowing me to upgrade my photography and video equipment to meet my clients needs and reach new clients by delivering better quality services.

I grew up on The Eastside of Long Beach where I saw a lot of Black owned business in the 70's which eventually inspired me to start my own business. In the 80's I saw a decline in Black owned business due to Gang & Drug Violence which at the time I became apart of until I wanted more for myself. I joined the Navy and became a photographer and found my calling for the craft. I can recall my first exposure to the creative arts at the age of 15 when began directing producing and doing choreography through a youth organization. It was not until college that I realized my love for the arts could be a business. A group of friends and I started a production company, called Aswad Entertainment. I was a talent coordinator and video camera operator for the production company that focused on clients in the music industry. I got off track from my dream to build my business and faced incarceration and homelessness but, eventually found my way back to the camera in 2012. My three daughters, Amber, Samara, Samirah and my son Asar and my mother Esther, became my driving force to make a change in my life, and I have not looked back. From there I invested my time and money in learning my craft and capturing images in the Long Beach & LA communities and bring smiles to the face of men, women & children. My goal is to continue building a successful video and photography business that can sustain long term clients in the corporate, government, & entertainment fields and I hope to someday capture images from around the world & further my work with youth to help give them access to the art of photography.