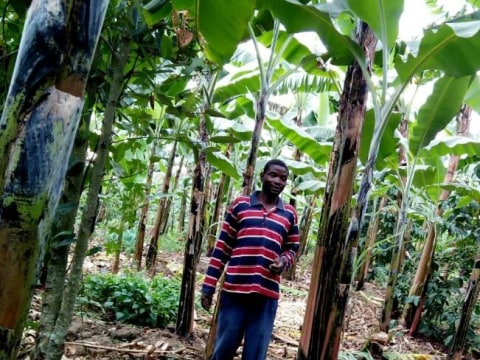 Milton's loan finished fundraising, but these other borrowers need your support

A loan helped to finish payment on the land to expand his cattle farm.

This is Milton, aged 29, married with two children who attend school. He is into agriculture, majoring in coffee and banana growing done in Bushenyi district as his main source of income. He also rears cattle and the income comes from cattle fattening, milk selling, and cattle trading.

Milton started with the coffee farm, which he took over after his father's death, but through hard work he managed to put up the cattle farm and the coffee plantation because he needed more money to look after the ever-increasing financial needs.

With the desire for more growth, he has been making partial payments on the plot of land near his farm to expand the cattle farm. However, he has not been able to finish the full payment on the land due to his many financial responsibilities, and yet the seller is threatening to sell it to another buyer.

He has therefore approached UGAFODE for a loan of 1,500,000 UGX to pay the last installment so that he can start grazing his cattle from there. He also plans on getting more calves for raising since he will have enough land.

Milton extends his gratitude to the funders for empowering farmers to develop themselves.