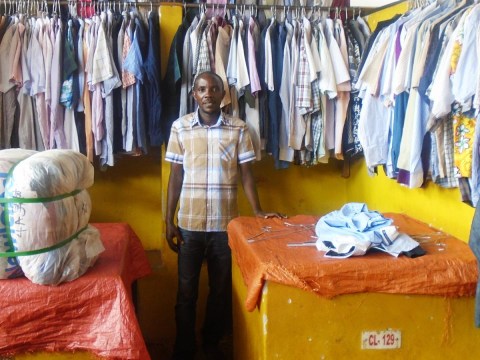 A loan helped to add stock in his boutique.

Isma, aged 37 years, is a married man with three children who all attend school.

He deals in secondhand clothes, specializing in men's shirts. This has been his main source of income for seven years. Isma started as a hawker selling clothes in open markets, but the challenges involved like unpredictable weather conditions and the high taxes imposed by the authorities motivated him to work hard to get a permanent working place. He saved up some money, and he rented a room where his boutique is currently located.

Isma's good customer service has won him many loyal customers, which has increased the demand for his clothes. He also plans to diversify his stock to include trousers, belts and shoes because they are frequently asked for by his customers.

To turn his plans into reality, he has approached UGAFODE for a loan of UGX 5,000,000 to add stock in his boutique.

He is hopeful that his sales will increase as well as his income, which will improve his family's standard of living. His future plan is to switch to selling brand-new clothes because they bring in a larger profit.

Isma sends his gratitude to the funders for the financial support that will boost his business.