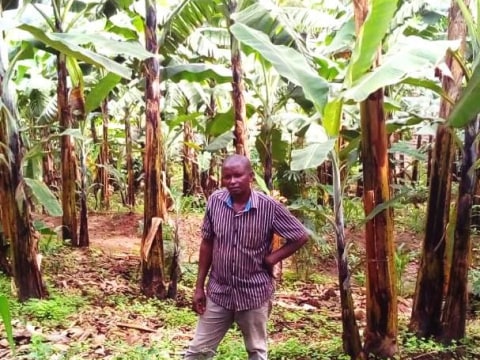 Yoram's loan finished fundraising, but these other borrowers need your support

A loan helped to buy fertilisers.

Yoram is an old client of UGAFODE (MDI). He is 47 years old and married with four children who attend school.

Yoram is into agriculture as his main source of income. He grows both food and cash crops including bananas and coffee. He is grateful for his parents who equipped him with farming skills. Apart from hard work, he has managed to expand his farming business through associating with model farmers in his region. His income comes from selling the bananas to the food markets and the coffee to the processing factories.

His crop production has declined due to the deterioration in the soil fertility that was caused by the ending of the long drought season. He tried to consult with fellow farmers who advised him to apply organic fertilisers but he lacks the income to buy them. He has therefore applied for a loan of 2,700,000 UGX from UGAFODE to buy the fertilisers for his farm.

He is optimistic that he will have good yields at the time of harvest, which will attract competitive prices, thus bringing in more returns. Yoram sends his sincere gratitude to the funders for the financial support that will improve his farming as well as transforming him financially.