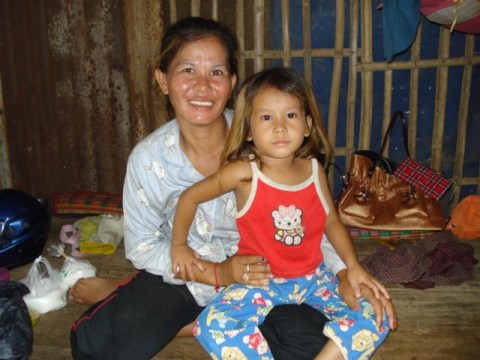 A loan helped To purchase a motorbike and a trailer to drive as a remoque taxi.

Mr. Noeun C. assists his wife selling fruit. They buy fruit from Derm Kor market in Phnom Penh for resale in front of a garment factory near their village. Noeun wants to create another business driving a remoque taxi (a motorbike connected to a trailer at the back). He will be able to earn more income to support his family. Hence, Noeun is requesting a loan of $1,200 US to buy a motorbike and a trailer for launching this business.

Noeun, 39, and his wife, Mrs. Chantha Sien, 40, have been married since 1990 and have five children: one son and four daughters. The eldest daughter works in garment factory and the other four children are in school. They live in a small village along National Road No. 5, about 20 kilometers from Phnom Penh.

Mr. Noeun C. is not in the photo; his wife was available instead.