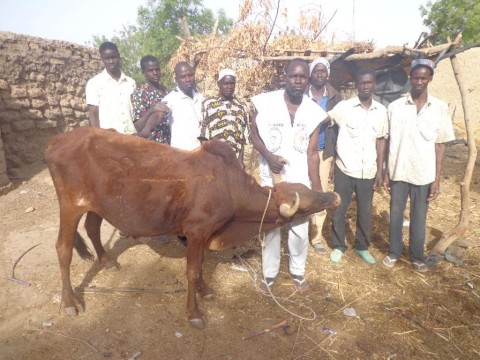 Djiguiya N°1 Group's loan finished fundraising, but these other borrowers need your support

A loan helped to buy cattle to resell in order to construct buildings for his children.

Souleymane is the man holding the bull's horn. He is forty six years old and the father of twelve children, aged four months to twenty two years old. Six of his children attend school. He has been fattening cattle for more than seven years now. His wife's main occupation is to be a housewife, but she also does some business to earn a living. With the loan, Souleymane is planning to buy and resell cattle at local fairs.
The partnership with RMCR [Kiva's partner in Mali] is very beneficial to his business. The loan helps him to provide for his children and his family. His dreams and hopes for the future are to be able to save up some money and to build brick buildings for his children to shelter the animals. He has a good reputation within the community and he is literate.
The obstacles that Souleymane faces in his business are insufficient rainfall and sometimes the death of some of the animals.