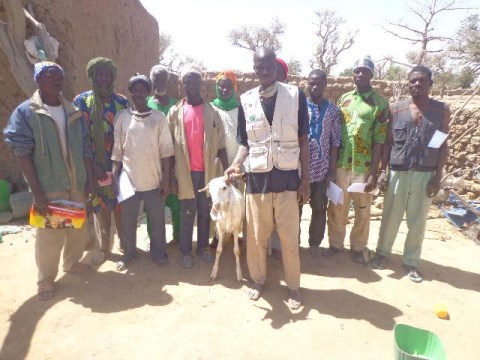 A loan helped to buy animals for resale in order to earn the funds to pen.

Daouda can be found in the photo holding the horn of the ram, in front of his group. At 33, he is the father of 04 children between the ages of 2 and 13. One of his children attends school. He has worked in the livestock sector for over 20 years. His wife works as a vendor.

With this Kiva loan, he will buy and sell in the local fairs, paying in cash. Daouda's partnership with RMCR has contributed to the expansion of his business.

With the profits generated from the sales, Daouda will be able to pay for the education of his children.

Daouda has one dream he plans to achieve: to build a sheep pen for his children. He is ready to begin his loan. In his business, the only obstacle Daouda faces is the death of his animals.