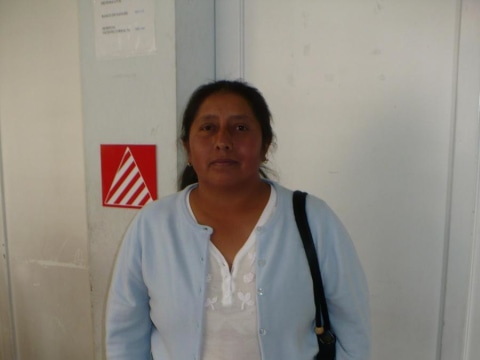 The "3 Marías" communal bank is located some 15 minutes outside of the city of Cuenca, in the community of the same name to the south of the city. Thanks to its location, the area enjoys great natural beauty and biodiversity. Its adult population works in agriculture and ranching, while the young people work in the city or have migrated abroad to provide a better life for their families. Ligia V., a member of the "3 Marías" communal bank, lives near the highway to Punta Corral. She is 34 years old, married and the mother of four children, aged 16, 14, 12 and 10. Her oldest son studies at Unedid School, her second son at Miguel Merchán School, her daughter at Herlinda Toral School, and her youngest child at the Yanuncay Educational Center. Her husband is a carpenter who traveled abroad many years ago to strive for a better present and future for his family. They do not yet have their own home, so they live at her mother's house. Ligia has worked as a seamstress in her own shop for the past fifteen years. She offers alterations to every type of clothing, and she also sews blouses, skirts, and pants; but the garment she makes most often is the "bolsicon," a traditional skirt worn by the women of Cuenca. She also raises chickens and pigs, both for her own household needs and to sell when her neighbors in the community ask for them, or when an economic emergency arises. She has worked with the foundation for the past three years, and she tells us that the loans she has obtained have allowed her to carry out her work and to educate her children. With the loan provided to her by the Espoir Foundation, she will buy fabric to make bolsicones, blouses, skirts and pants for her regular customers. Her goal is to expand her business and eventually to build her own house.