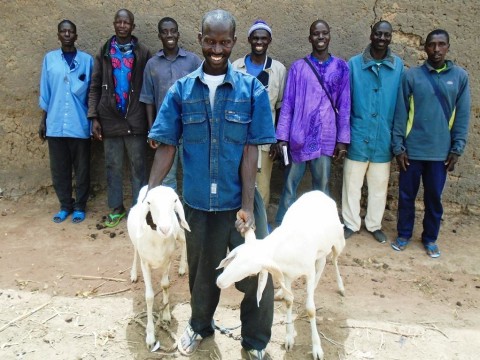 A loan helped to buy animals to resell.

Sekou is the one holding onto the sheep in the photo. He is 41 years old and from Mali. He is married and the father of five children, aged from three to 10 years old. His wife manages the household.

Sekou has worked raising livestock for eight years. He buys and sells his animals in the weekly local markets. Sometimes he encounters major difficulties, such as the death of his animals despite veterinarian care. After his sales, he has profits between 20,000 and 40,000 francs CFA per animal for some months.

These earnings allow him to take care of his children's health, clothing, and school costs as well as stabilize his family's food security.

Sekou depends on a loan from RMCR so that he can expand his work and buy many animals, which will help him get out of poverty and improve his family's living conditions.