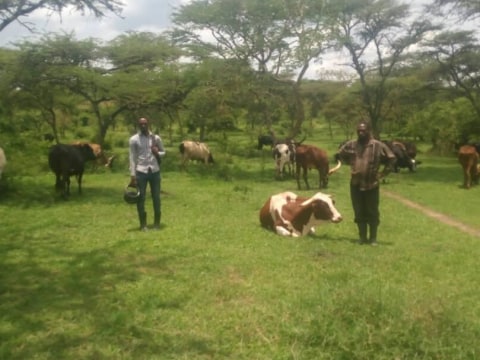 Julius is a married man with nine children; five attend school. He is a prominent cattle keeper, and the largest part of his income comes from milk selling. He has been in this dairy business for quite some time, and he has been able to earn a living from it. He also grows coffee, which he supplies to processing factories on harvest for supplementary income.

Julius has managed to improve his farming through associating with model farmers and attending agricultural workshops. With desire for more growth, he has applied for another loan of UGX 3,000,000 to buy dairy calves for rearing. He is hopeful that his milk production will double in the near future when the calves give birth and also expand his farm, thus bringing in more returns. Julius appreciates the funders for the financial support that will transform him economically, thereby bettering his family's standards of living.

In the picture, is the client (right) and the UGAFODE credit staff.