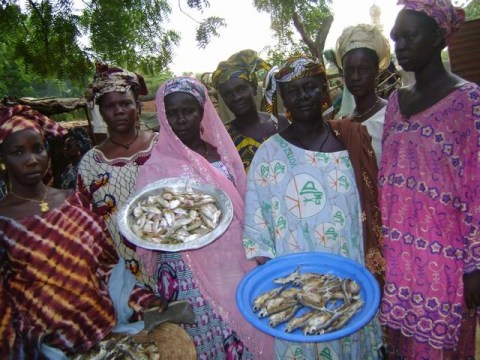 A loan helped To buy fish.

The seven members of Dembagnouman Group (one widowed and six married women), on average, are 40 years old and have four children. They live in polygamous families in the neighborhood of Djaka (Kirango) in Markala, fourth administrative region of Mali. The group members know each other through links of family, marriage, friendship and neighborhood. They make a living from buying, processing and selling fish. Eager to better serve its customers, the Dembagnouman Group has decided to join the credit program offered by SoroYiriwaso. This is the Group's fifth solidarity loan, after having repaid the previous four loans on schedule.

This new loan will be used to buy 72 baskets of fresh fish and 100 ice bars, provided by carriers coming from Bamako. They get their fish supply on the banks of River Niger, then they dry part of it on gravel, on straw or on "seccos". The fresh fish will be sold on location in Kirango and in Diamarabougou Markala, or kept refrigerated in ice and sold at the Castle Market in Ségou and in Bamako. The dried fish will partly be stockpiled until the water level of the river drops in winter and they can sell it at a higher price, and partly be sold in Dougabougou, Siribala, N., Shango and Boussin, as well as at the weekly market in Ségou. They also sell smoked fish, mainly in Ségou. Most of their sales are for cash to a clientele made up of women and men.

They expect to make an average monthly profit of 75,500 CFA francs which they will spend on small household expenses and use to take part in social events (baptisms, weddings and funerals). Their ambition is to buy livestock so as to build houses for their children in future, because their father's house belongs to them all and nobody has the ownership of it.