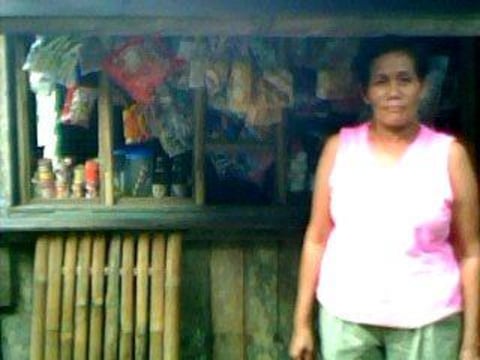 Nieva's loan finished fundraising, but these other borrowers need your support

A loan helped To restock her general store and purchase more products to sell.

Nieva P. lives in the village of Brgy. Buenavista, Pontevedra, Negros Occidental. She is 51 years old and married to Francisco P., a farmer. They are blessed with three children, one of whom has a family already while the other two are still attending school. One of Nieva's dreams is for her two children to finish their education so that they are able to earn a good income and help her in the future.

While her children were growing up, Nieva realized that she could not rely totally on the income her husband earned from farming. This is because it could sometimes be very volatile and dependent on so many external factors, including the weather, that may affect the volume of production. Added to this was also the increasing expense of educating her children. This is why Nieva joined NWTF-Project Dungganon in 2004 so that she could access capital to start a general store. Using her loans over the next few years, Nieva continued to expand her operations, and began to include frozen products. She now earns an average monthly income of 12,000 PHP – a very respectable income that has been a great help in improving her family's quality of life.

About NWTF
In a world full of challenges, Negros Women for Tomorrow Foundation (NWTF), is making a difference in the lives of thousands of women through Project Dungganon (a Hiligaynon word that means honorable). Through the alleviation program, NWTF is empowering these women to progress from earning less than $1 a day to achieving realities that surpass even their dreams, and earning the respect of people in their community. They have taken a life path that will ultimately make them "Dungganon" – to be called "Honorable" is a mark of respect that everyone hopes to attain in their lifetime.