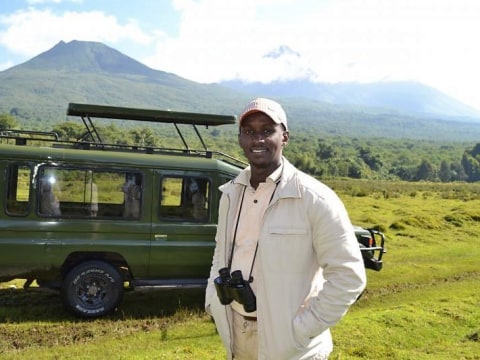 A loan helped to buy a safari car for his local tour company.

After nine years working as a contract tour guide, Olivier decided to start his own tour business called Great Apes Safari. Rwanda is not as well-known for its beautiful scenery and wildlife as some of its neighbors; however, Olivier seeks to change this narrative by sharing Rwanda’s equally incredible, if not more incredible, attractions. From volcanoes to mountain gorillas to lazy days at Lake Kivu, Great Apes Safari offers tours to Rwanda’s most adventurous and most relaxing destinations. Olivier has big dreams to make Rwanda a major tourist destination in East Africa. He is hardworking and has learned many foreign languages to improve his tour services. He also has the local knowledge that large foreign tourism companies can’t compete with. However, Olivier lacks an important resource: a car. Right now Olivier rents safari vehicles as needed, but his own tour vehicle would allow him to save significantly. Olivier has worked hard to save up half of the safari car cost and seeks a loan to finance the rest. An investment in Olivier places Rwanda on the map for tourism experiences led by local guides.