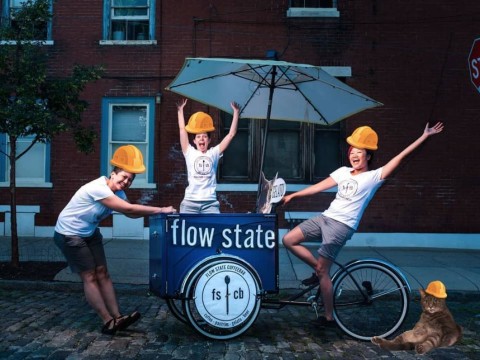 Melanie Diamond-Manlusoc, co-founder of Flow State CoffeeBar, holds a Bachelor of Music Education from Michigan State University and an Associates of Applied Sciences of Patisserie and Baking from Le Cordon Bleu College of Culinary Arts, Chicago. While she was studying classical saxophone at MSU, she took a trip to northern Italy for a saxophone festival. There she fell in love with the rich, custard-based gelati of Emilia Romagna. During a very successful career as a band director, she ran away to culinary school, opened her own gelato business, and quickly moved up the pastry ladder in Chicago’s finest kitchens. She was chef/owner of Gelato Vero and trained in the James Beard Award-winning and Michelin-starred kitchens of Blackbird, Avec, Henri, Japonais, Japonais by Morimoto, Spiaggia, and Cafe Spiaggia. She was nominated as a Rising Star Pastry Chef in 2015, recruited to consult for Anheuser-Busch, and her work has been featured in the Chicago Tribune, Food and Wine, Chicago Magazine, the Chicago Reader, the Windy City Times, Michigan Avenue Magazine, Dish, Swide, Splash, Starchefs.com, WCIU-TV Chicago, and numerous local, national, and international food blogs. Melanie's characteristic tenacity is evident beyond the accolades she has racked up. After visiting Philly and witnessing its vibrant food scene, she decided then that this was where the venture needed to happen, sparking the entrepreneurial journey currently underway. After 18 months of planning, fundraising, and marketing for the venture, Melanie left her high profile position in Chicago, sold the condo she and Liz owned, and they moved to Philly in November of 2016 to begin the next chapter. Since then, it's been all Flow State all the time!