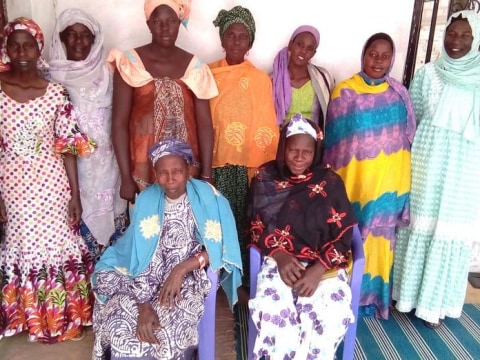 A loan helped to buy sheep for fattening.

This group was created in April 2017. It is comprised of 10 women who live in the same village. Its members are relations and neighbours. They are engaged in the sectors of livestock farming and business.

The borrower featured is Madam Aïssata, who is standing to the right in the photo with her hand raised. She is 54 years old, married, and the mother of one daughter. Aïssata fattens sheep at home which she buys in the local market on a weekly basis.

With her loan, Aïssata will buy 4 sheep for an amount of 80,000 XOF as well as hay and other food for livestock with 20,000 XOF. The sheep will be sold at the local market after 4 months of fattening. Aïssata hopes for good profits. The profits she receives will be used to increase her herd as well as support her needs and those of her daughter.