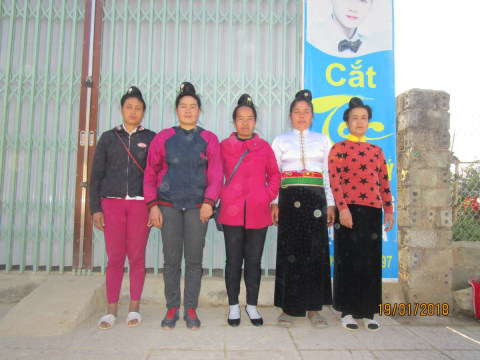 A loan helped to buy piglets.

Thu, 58, is a Thai ethnic woman who is married and lives with her husband, son, daughter-in-law, niece and nephew in Viet Nam's northwest mountainous area. She did not have chance to attend school, so she became engaged in farming work when she was very young. Like other villagers, most of her family's activity is agricultural production such as growing rice, corn, and arrowroot, and raising fish, buffalo, pig, and chicken. Sometimes her son goes to work as a temporary worker to have more income.

Because of her crowded family, she has to try hard to cover the family’s living expenses. Recently, she has taken out her first loan from the Anh Chi Em program to buy piglets. She hopes she can sell them in the next months and have great profit. She shares that she wants to give her nephew and niece the best education in order for them to have a better future. In the picture, she stands at the first from the right.