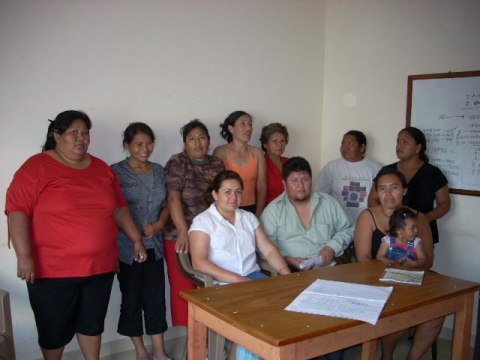 Guapuru Group's loan finished fundraising, but these other borrowers need your support

The Guapuru Communal bank was founded in 2007. They are currently in their sixth cycle. All of the members are accomplished, and they are united among themselves. They hold their meetings in Ruth Montegro’s house. She has been the president for two cycles. Most of the members prepare and sell food, make bread, or sell cosmetics. One member of the group is a man who, in addition to selling food, also manages sound and animation equipment. Ruth Montegro is one of the founders of the communal bank. She is married and has a daughter who goes to school. She lives in a rented house with her husband who works in urban transportation. She is president of the communal bank. She sells empanadas, and, most of all, she sells ordered lunches to businesses and construction workers. She now feels satisfied with the economic support she brings to her household. She feels important, and she also saves and shares with her friends and neighbors who are part of the bank. Candelaria V. is a very responsible member who always arrives before the others and is the last to leave. She makes bread in her house where she lives with her family. Her daughters help her make the dough and bake the bread. Soon, she would like to buy a larger oven and be able to set up her own store in her home. She wants to do this to improve her earnings. She knows that she is not very far from her goal because in her communal bank she has learned how to save money, be responsible, and to reach her objectives. Andres S. is a long-time member. He has been with the group for three cycles. He is an accomplished and responsible person. He sells food with his wife. On the week ends he works with his amplification equipment. He uses the equipment when he is contracted to work on the week ends at parties. He is proud to be part of a group of women who support each other and are accomplished. In addition to be responsible with his own family, he helps his sister raise his two nephews. He works hard and is very happy to belong to this communal bank.