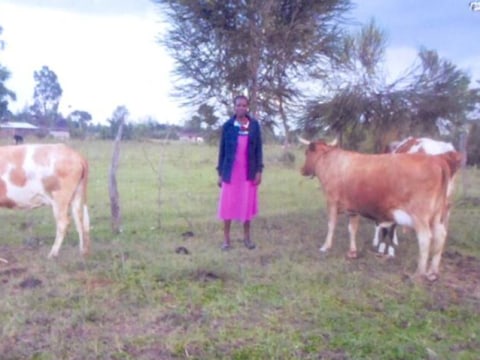 Emmy's loan finished fundraising, but these other borrowers need your support

A loan helped to buy cereals to resell so that she can make a profit to educate her children.

Emmy is a 39-year-old mother who lives in extreme poverty and can hardly afford three meals a day for her children. Her only sure meal is a mixture of maize and beans commonly referred to as “githeri” that she feeds her children.

Emmy practices dairy and organic farming, and she is full of dreams and aspirations in her life. Through organic farming, she is able to avoid the problems associated with fertilizers. She is the key breadwinner in her household. Because of her immense knowledge of farming, she commands a lot of respect from other farmers in her village. Her primary sources of income have been milk, eggs, and crops.

Even though Emmy has been earning money through farming, she realized that she could increase her income by selling cereals in her local market. The market for cereals is promising in her region, and thus she is self-assured that she will make great strides. She is requesting a loan to buy cereals.

Emmy intends to buy different varieties of cereals such as maize, sorghum, rice, wheat, barley, and millet to sell in the local market. The market for cereals is never a problem because the demand is always high, and she plans to take advantage of this. Because of her good customer skills, Emmy is sure that she will be able to make great profits.

You can help her support her children’s education through the profits she will earn from cereal trading.