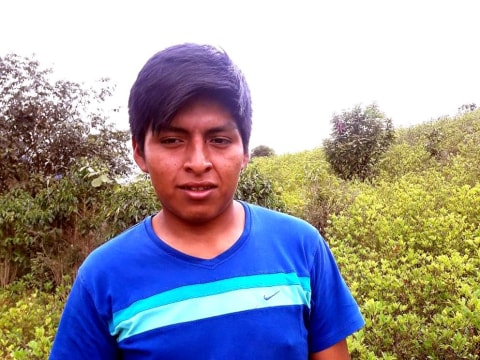 A loan helped to build a room where he will store his produce and stop suffering losses in order to become independent.

Aldair is 20 years old. He is single and grows coca leaf.

He works in Coroico, a rural area where it is ​​traditional to grow coca leaf, coffee and mandarins.

Aldair lives in his family's home where he has agricultural land that was given him by his relatives to produce and become independent. He grows coca leaf. This is a leaf of millenary tradition since before the discovery of America and it is used as an infusion or in the traditional way; chewed in the mouth.

Their land does not have a shed where to shelter the agricultural implements, nor the harvest. This causes losses due to the weather and the animals and pests of the area. To overcome this need he must build a warehouse. The advantage is that he harvests 3 times a year. The problem is the losses suffered by the lack of a room.

His dream is to become independent and improve his income. He wants to cover his produce indoors. With this loan, he will build a room where he will store his produce and working tools. It is the first loan received from the institution in the 3 years since he started working.

It is for these reasons that Aldair is requesting a loan to build a room where he will store his produce and stop suffering losses in order to become independent.