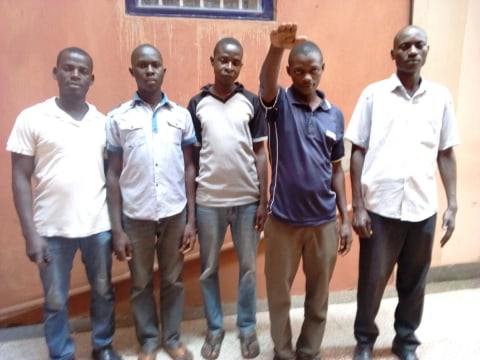 Charles is a 28-year-old member of the Napier group located in Napier-Jinja. He is married with two children aged four and two. Charles deals in the chicken trade in Napier to sustain his family. Other group members carry out different economic activities with a goal of poverty eradication.

Charles is described as a hardworking, down to earth and honest person by his group colleagues. He is grateful for the support. The extra person who is in the picture at the extreme right is the chairperson already has a running loan. He signed the waiver form.

Charles buys chickens in large numbers from local farmers at relatively low prices and re-sells them for a profit. His main clients include restaurants, chicken roasters, and several individuals. He works 6 days per week from Napier. He has a dream of being the leading supplier of chicken from Napier.

He hopes to save some money to venture into seasonal agriculture to supplement his income.

In preparation of the festive season, which is around the corner, Charles is planning to increase on the number of chickens to meet all customers' needs because the demand is always high in such seasons.

However, currently his working capital is too low to pay suppliers. He has therefore applied for a loan from UGAFODE to enable him buy in large quantities.

He is hopeful that this will boost his business, thus increasing his finances to embark on his agricultural plan.