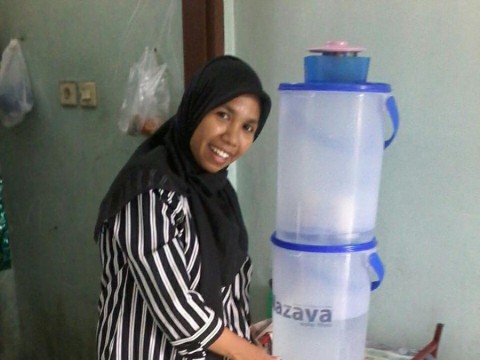 A loan helped to purchase 215 water filters to sell on the isolated island of Sabu.

Mrs Three is the leader of the Organization of Public Hygiene workers (HAKLI) on Sabu, a small, very remote island in East Indonesia. She started selling Nazava Water Filters because most of the water sources are contaminated by bacteria in Sabu and the people do not have enough fuel to boil the water.

Together with her organization, she has provided safe drinking water to 6,000 people on Sabu, improving health and lives.

Mrs Three, who fulfills a leading function in her neighborhood, seized the opportunity and became the sales representative of Nazava in her area. This is the fourth time Mrs Three applied for a loan. She has an excellent record in repaying her loans.

Mrs Three already sold 1,200 water filters on her island which means that she provided over 6,000 people with safe drinking water. Selling water filters provides revenue to the association of health workers that has no other income. Even though selling the filters has proven easy, transporting the filters to the villages is very expensive because of bad infrastructure and often a lack of fuel.

Mrs Three will use this loan to buy another 215 filters to sell to her community helping another 1,000 people obtain access to safe drinking water!