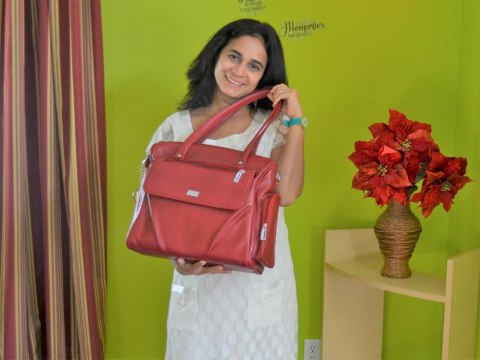 A loan helped me cover the development of product samples and initial production costs of our second patent-pending diaper bag.

15 years ago in 2002, I came to the United States of America for my Master's program. It was just surreal because I was a girl who had never gone to a different city alone, and there I was moving to a different country. Well, not only to a new country but a new continent. I am thankful for my parents who believed in me and let me pursue my education and dreams in America.I finished my Master's program in 2004 and worked for Corporate America until 2016. The choice to become an entrepreneur was accidental. My family has never owned business. My dad and granddad worked for corporations, and it’s interesting to note that it was only the men in my family. Yep, no women in our family worked. I was the first one and launched a career as a hardware engineer for a very prominent company in the amazing Silicon Valley tech industry. Fast forward, I got married, gave birth to my son, and I continue working after my son was born. Life became a balancing act between “work-life” and “mom-with-baby” in the fast-paced tech world. While working as a hardware engineer, I had an opportunity to mentor a girl’s team for a Tech Challenge(2014). Teaming with young ladies in the design process just reignited my creative spirit. Thus, I started working on coming up with a solution for a personal pain point I had as a new mom. I wanted a diaper bag which is practical and elegant! When I could not find one I decided to make one. Fast forward a second time, I transitioned from the corporate world and entered the entrepreneurial world in January 2016. Precisely after a year, in January 2017, I launched my diaper bag.