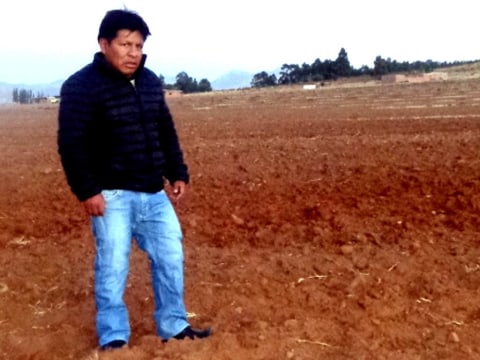 Alberto's loan finished fundraising, but these other borrowers need your support

A loan helped to buy agricultural supplies to start the productive cycle of the potato.

Alberto is 44-years old and has one school-aged son. His job is producing potatoes. He works in the rural "Betanzos" area, very well-known for its caverns with cave paintings.

Alberto lives in a family house. He has land that he got as an inheritance from his parents, where he grows potatoes and little bit of wheat. He does not have an irrigation system, only rainwater.

The agricultural cycle is yearly, starting with planting in October and harvesting in April. He sells the harvest in his community. Thanks to this job, his financial situation is stable with prospects of growing.

It is now the planting season and he needs to start with the corresponding jobs. The advantage is that he stocks up on the harvest and sells it according to demand. The inconvenience is transporting the products from his land.

His dream is to buy a vehicle to transport his products. He hopes to start preparation on his land for planting. With this loan he will buy fertilizer, potato seeds and will hire helpers to start the productive cycle.

This is the second loan that he has received with the institution. It is for those reasons that Alberto is asking for a loan to buy agricultural supplies to start the productive cycle of the potato.