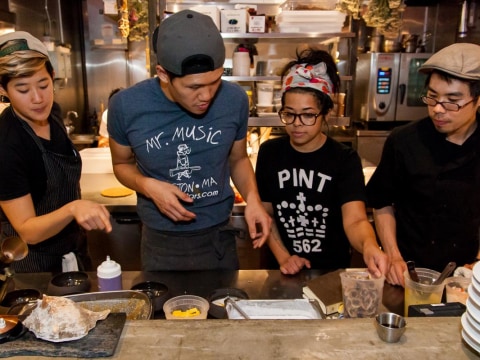 Ellie's loan finished fundraising, but these other borrowers need your support

A loan helped fund our opening inventory and the compostable paper goods we'll need to start our restaurant co-op.

I never thought I'd open a restaurant -- it just turns out letting life unfold naturally led me to it. When I made the heartbreaking, necessary decision to leave neuroscience (see 'Surprising Cells Stymie Sepsis' for the last publication that bore my name), I tried many paths for years and after unsuccessfully trying to fit in at corporate healthcare software company, still felt unfulfilled and unsure of next steps. What I did know was that I missed Filipino food, enough to float the idea of a pop-up to my visiting brother. While the idea to start my own pop-up business felt like it came from nowhere, in retrospect I believe there were a few contributing factors. To make money for a cross-country roadtrip, I became a personal chef for a client accustomed to great food (he being a restaurant owner himself). After giving a newbie like me a trial week, he expressed genuine surprise at the quality of my menus, wondering how I was able to produce food like what he'd been eating without being formally trained. That in turn surprised me -- I made food people were happy to pay for? But more influential was the decision to help cater a wedding for a nascent Olio. While it was something fun to do, I didn't realize how deeply I'd connect to members who were deeply engaged in activism and put those values to work in the kitchen. Fast forward a few years, both Olio and my project Kulinarya have convinced hundreds of people that our food is delicious and worth supporting. Personally, spearheading the restaurant empowers me to make real, decisive choices within a cooperative structure and create a space that combines food and other art forms to craft truly experiential dining.