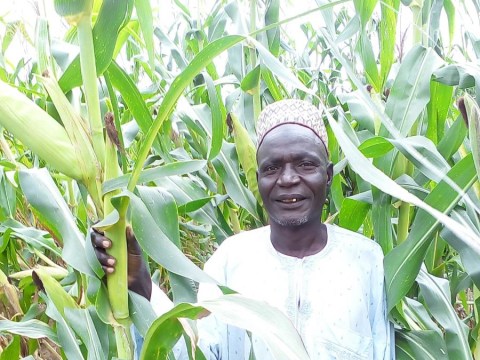 Haruna's loan finished fundraising, but these other borrowers need your support

A loan helped to purchase construction materials and build a bigger house to improve his family’s standard of living.

Haruna is a maize farmer, he is married and lives with his wife and children in a modest mud house in a small village in Kaduna.


Thanks to his last loan from Babban Gona, he gained access to high-yielding seed and fertilizer, and now expects to double his harvest.

As a Babban Gona member, Haruna will now receive a Harvest Advance loan, providing him with a cash advance, he will use this loan to build a better house for his family. Additionally, Babban Gona will support Haruna by storing the harvested maize to sell later in the year. Now, he does not have to lose profit by selling his maize at low prices.

Haruna can now generate earnings of up to four times the average Nigerian farmer’s annual income. His happiest memory as a Babban Gona farmer has been sending his children to better schools.