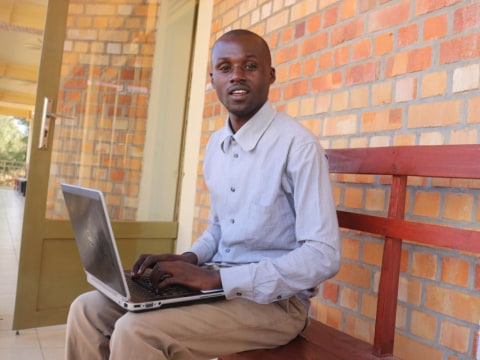 Alphonse's loan finished fundraising, but these other borrowers need your support

A loan helped to pay for a laptop required for a US college degree.

Alphonse grew up in the outskirts of Kigali, a semi-rural area called Bugesera, where he was raised by a guardian after the death of his parents. He is a 26-year-old student at Kepler in his first year.

With the support of his older sister, he was able to complete his primary and secondary education. This year, he was accepted from thousands of applicants who applied to Kepler, due to his English skills and high performance. He applied at Kepler because of the degrees offered and the loan program made available to students.

He will be able to study for a Bachelor of Arts in communications with a concentration in business and develop his professionalism. After graduating, he would like to get a job as a marketing manager, so he can help the rest of his family. As part of the community, he feels that it is imperative that he gives back by practicing the skills he would have learnt, while participating in different projects to contribute to the development of his community.