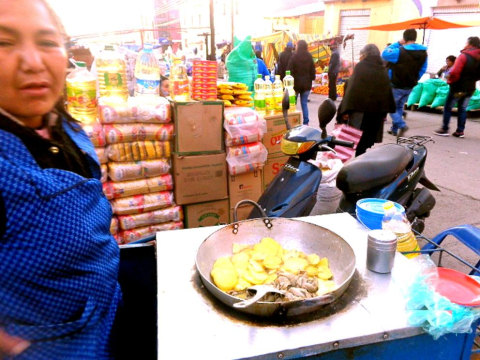 Deysi's loan finished fundraising, but these other borrowers need your support

A loan helped to buy a refrigerator to store food and sells twice as much of it.

Deysi is 33 years old. She is divorced and the mother of a child who is in school, and a baby. Her business is selling tripe.

She does her activity in different city markets in the city of ‘Potosí’, known for the Casa de la Moneda, where in olden days coins would be minted for the Spanish crown.

Deysi lives in the family home with her children. Her work is selling boiled tripe, which consists of boiling cow tripe to later fry and serve with corn and boiled potatoes. She buys the tripe directly from the slaughter house and prepares it in her home to later sell in a 2 wheeled cart with a gas stove. She works from 6 in the morning until noon, when she finishes. Previously, she obtained a loan to start her business and she had the idea of investing in buying two carts and two gas tanks, with the idea of hiring an assistant in the future and working both carts. That time has arrived and to increase production, she needs a refrigerator to store the tripe she works with. The advantage is she is known and has regular customers. What is inconvenient is she does not have anywhere to store the food. Her dream is to double her income. She wants to have a refrigerator to expand production.

This is the 2nd loan she has received from the institution in the 14 years she has been doing this activity.

It is for these reasons that Deysi is asking for a loan to buy a refrigerator to store the food and sell double the amount of food.