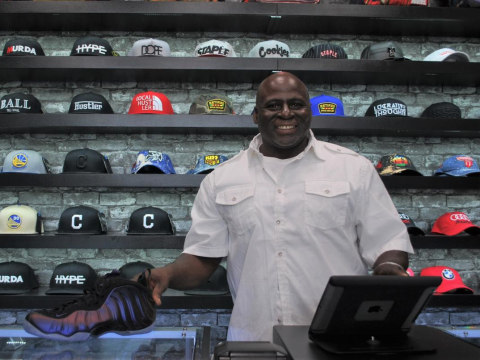 Louis's loan finished fundraising, but these other borrowers need your support

A loan helped this growing business increase their reach into Columbus' and Central Ohio's communities.

I was born in Brooklyn, New York. As a kid, I spent my summers on the boardwalk at Coney Island selling sodas and trinkets. As a teen, I wanted all the latest urban styles. I loved basketball, sneakers and Hip-Hop. And when Michael Jordan made his first sneaker... I bought it for $275, in 1985. In 1990, I married and started my family. We decided to relocate from New York to Columbus in 2006. I chose Columbus because I saw the opportunities and growth potential. At that time, I was installing flooring. A few years later I became a licensed contractor. I rehabilitated homes and renovated commercial and residential spaces. I formed a relationship with the City of Columbus where I purchased and restored homes for their revitalization program in the Linden area of Columbus. Premium Kicks is my latest business venture. It is something that I am truly passionate about because I understand how it feels to want something badly and get it. I also understand the sub-culture that it serves, that is sometimes misunderstood because of what they consider valuable.