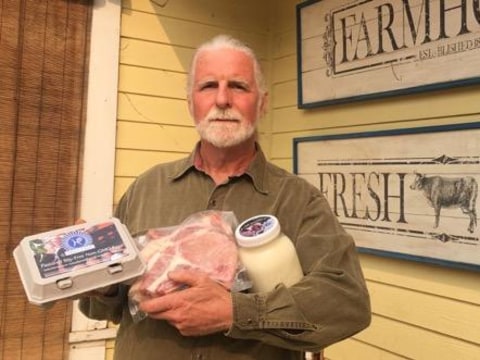 Theo's loan finished fundraising, but these other borrowers need your support

A loan helped buy butchery equipment to allow us to expand our on-farm butchery capabilities (currently hogs and chickens and hamburger-beef only) to include beef cuts, lamb, and game.

Theo was raised in Silverton, Oregon where his first jobs were working in fields for local farmers, driving farm equipment, and working for large food processing companies. He worked in agriculture initially, and then for Hewlett Packard, while going to college (Oregon State University) and earned a degree in Engineering Physics. After graduating, he started a small publishing company that wrote books about HP calculators, then started a technical writing company, which he expanded into a software localization company and grew through the 80's and 90's until he sold the company in 1998. It is currently the Corvallis, Oregon office of translations.com. Two of Theo's sons, born in the 1980's had serious health issues that eventually brought awareness of serious misinformation campaigns that are effecting the health of families around the world. Theo's wife Kira had health issues that were resolved through corrected information on foods and proper nourishment. All of their exposure to misinformation over several decades culminated in creating Helios Farms, which is a fun and energizing business committed to profitably correcting misinformation about raw milk, centralized agricultural practices, and to supplying foods that are not modified from their edenic form.