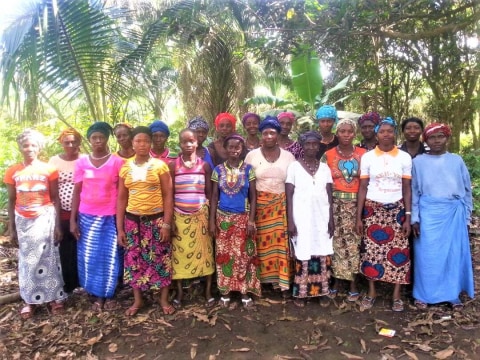 A loan helped to pay for improved seed, organic inputs and tractor rental which will allow these farmers to escape subsistence by farming a larger area with a higher yield.

Aunty Aminata" as she is affectionately known in Makeh is an outstanding entrepreneur and businesswoman who supports a family of six. Aminata (first from right) believes business an important way for women to become empowered in the community, and is a successful farmer, landowner, village elder and also runs a trading business in the off-season. While international coverage and the acute danger of the Ebola Crisis have faded, survivors are still rebuilding and trying to recover from the economic damage done. In Aminata's community many women lost their savings and businesses during the crisis, and have now way to rebuild. With her spirit of determination, "Aunty Aminata" has mobilized a large group of these women for a KIVA loan and is both organizing them and mentoring them so that they can rebuild their livelihoods while increasing food production in the community. A KIVA loan to these determined women will enable them to rebuild their lives and their community after Sierra Leone's Ebola Crisis.