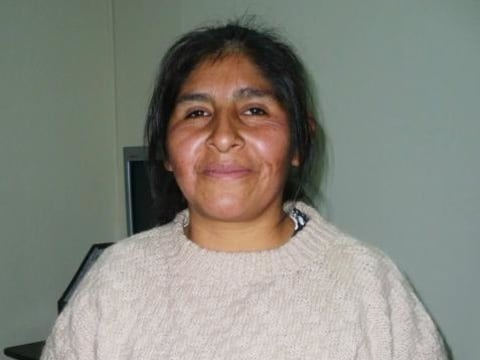 A loan helped the purchase of provisions and ingredients for meals.

Marina is 37 years old and lives in her own house with her husband Estaban, and their children Alex (13), Yoiri (6) and Brigitte (2). For a living, she sells food such as deserts, empanadas, “salchipapas”, and chicken soup at a small stand that she has in the Jerusalén market, one of the most well known in her district. Her husband Esteban also works, but he doesn’t have a fixed job which is why Marina’s work is so important to the household. In addition, at her food stand, she sells dolls and makes handicrafts to earn extra income. Marina is attentive to her customers and has gained many friends and new customers, which is the best part of her work. Marina has been in this business for 17 years and wants to continue to progress. Her future desire is to have a restaurant which specializes in barbecued chicken. Although she knows it is good to dream, she thinks that there is a long road ahead of her before she gets there. This is her 13th loan with MFP and her previous payments have always been characterized by punctuality. With the money she is asking, she will buy rice, noodles, potatoes and other ingredients to make different foods.