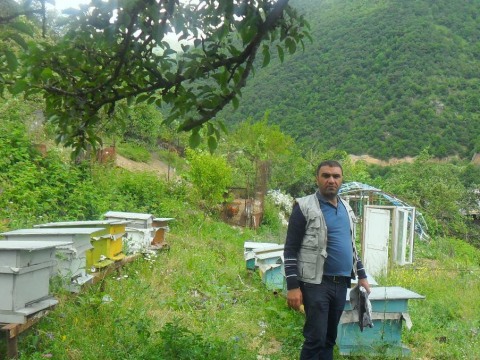 A loan helped to develop his beekeeping and he wants to buy a honey squeezing machine and also to enlarge the number of his beehives.

Gor is 34 years old and he lives with his wife and two children in the village of Kadjaran in the Syunik region. Gor works at the city’s combine where he used to work as a locksmith but now he already has a higher position and he is head of production.

Gor is also a skilled beekeeper. He has a lot of beehives and a large plot of land which gives him a harvest of beans, potatoes, cabbage and also fruits such as apples, apricots, pears and plums. All these he sells locally. Gor’s wife, who works at the school as a teacher of English Language and Literature, also helps him in his farm work and together they manage to sell both their farm’s honey and their land harvest. Gor is asking for this loan since he wants to develop his beekeeping and he wants to buy a honey squeezing machine and also to enlarge the number of his beehives.