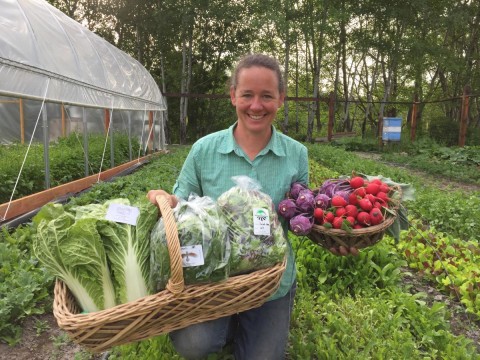 A loan helped fund the purchase of a delivery vehicle for our expanding local produce wholesale distribution business.

I am a Vermonter by birth with long family ties to the Lake Champlain area. My paternal lineage dates back to 1815 in the little town of Alburgh, VT. Rural life in Vermont shaped me into the hardworking individual that I am. My parents and grandparents all had large vegetable gardens coupled with food preservation and a self-subsistence life style. The natural beauty of the Vermont landscape led me to pursue a degree in Ecology and Environmental Technology with a teaching certificate in general biology. After college my husband and I decided to start running sled dogs. This occupied the better portion of 15 years of our lives. The sled dogs brought us from our home in New England to Alaska and eventually to northwestern Montana. In Montana, we decided to set roots and in 2011 we started The Wicked Good Farm, originally a small backyard urban market garden. In the spring of 2017 with access to more land, I decided to become a full-time farmer and wholesale distributor of local produce. The idea of a wholesale distribution focused on local foods emerged per conversations in 2016 with other vegetable farmers in our community. After networking with chefs and farmers, I identified that the local produce distribution concept had weight. The farmers were excited to the idea of new markets being opened and the chefs were excited that there would be a cohesive weekly list. So, in 2016 I began Wicked Good Produce. I started small with just a few restaurants that were close to home. In preparation for the second season, I spent the better portion of the past winter networking with new wholesale accounts and farmers. Which brings us to today with doubled the number of wholesale accounts and overall sales have increased fourfold from a year ago.